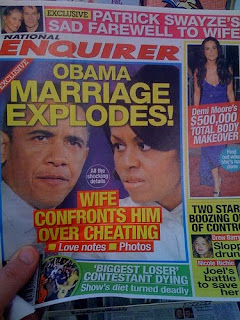 In March 2010, average weekly print circulation — newsstand and subscription — of the National Enquirer declined year-over-year 16.1 percent to 732,000 copies. By comparison, total paid and verified weekly circulation averaged about one million in 2007, according to media observer Audit Bureau of Circulations (ABC).

Declining circulation isn't just endemic to the Enquirer. Overall average paid daily circulation for the top 25 dailies fell 8.7 percent year-over-year for the six months through March, according to ABC. Weekday sales at the New York Times (NYT) and the Washington Post (WPO) fell 8.5 percent and 13.1 percent to 951,063 and 578,482 copies, respectively. In fact, only the The Wall Street Journal managed to eke out a gain, of about 0.5 percent.

What the Enquirer needs to pump up weekly tabloid sales is a good scandal – say, on the order of John Edwards and his love child. The Enquirer’s latest investigative controversy is a rehash of an alleged presidential cheating scandal between then Senator Barack Obama and a former campaign aide, Vera Baker (circa. 2004). The paper has offered a $1 million reward for alleged security video footage of the two entering a Wahington DC hotel together.

Can the Enquirer survive in the age of media-savvy competitors like TMZ and Perez Hilton? "Enquirering Minds Want to Know!"

Post Update: An "open-minded" reader -- (after looking at his blogroll links I suspect he probably thinks that the grand social experiments engineered by the likes of Chairman Mao and Stalin - in which millions were either slaughtered outright or starved to death very slowly -- were wonderful attempts towards the utopian plain of equality) -- had this assessment of my Nat'l Enquirer blog posting:

Ted K: I'm ashamed to say I had you on my blogroll. Not after this trash. Good luck keeping your blog going with this type "fair."

Me: Hey, Ted! What do you call a Muslim woman who previously favored western-style clothing, but after having an arm chopped off by the Iranian religious police only wears a burqa?

There you go -- How's that for transparency and fairness? Oh, my mistake -- only President Obama has a lock on those virtues.

Editor David J Phillips does not hold a financial interest in any stocks mentioned in this article. The 10Q Detective has a Full Disclosure Policy.

I'm ashamed to say I had you on my blogroll. Not after this trash. Good luck keeping your blog going with this type "fair"

What do you call a Muslim woman who previously favored western-stye clothing, but after having an arm chopped off by the Iranian religious police only wears a burqa?

There you go -- How's that for transparency and fairness?