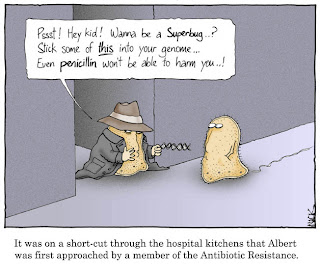 The relative efficacy of Optimer Pharma's (OPTR-$13.49) investigational antibiotic, fidaxomicin, compared to standard-of-care vancomycin (marketed as Vancocin by drugmaker ViroPharma), for the treatment of the hospital-acquired gastrointestinal infection Clostridium difficile remains unclear, as published results show similar recurrence rates in a subset of patients infected with a life-threatening strain of the C. difficile spores. In the opinion of the 10Q Detective, even if Optimer obtains regulatory approval to market fidaxomicin, its commercial success will be limited, as the Food & Drug Administration is likely to move forward on an advisory committee’s recommendation for the sale of cheaper, generic copies of Vancocin.

Risk factors for C. difficile include advanced age, antibiotic therapy, and severe underlying diseases—with the precipitating event a disruption of the normal microflora in the colon. Acquisition of C. difficile occurs primarily in the hospital setting, where the organism has been cultured from bed rails, floors, windowsills, and toilets, as well as the hands of hospital workers who provide care for patients with C. difficile infection. The organism can persist in hospital rooms for up to 40 days after infected patients have been discharged, according to an article authored by Michael Schroeder, MD, in the peer-review journal American Family Physician.

Optimer reported top line data from a late-stage study in November 2008, showing that fidaxomicin met both its primary endpoint of clinical cure (defined as patients requiring no further therapy two days after completion of study medication) and secondary endpoint (which evaluated recurrence up to four weeks post therapy, with recurrence defined as the return of diarrhea associated with C. difficile confirmed by a positive toxin test.

A more detailed analysis of the Phase 3 study presented at the 19th annual European Congress of Clinical Microbiology and Infectious Diseases in May, however, showed that fidaxomicin was no more effective compared to Vancocin in a subset of patients with the most virulent strain (known as BI/NAP1/ribotype 027). The recurrence rates for fidaxomicin and Vancocin in the BI/NAP1/027 subgroup were 25.0% and 24.1 percent.

Relapse with the same or different strains occurs in about 10 percent to 35 percent of patients treated with either oral vancomycin or the oral anti-infective metronidazole (off-label usage). Although fidaxomicin affords no special protection from recurrence with the hyper-virulent strain, chief financial officer John Prunty remains optimistic, telling Xconomy editor Luke Timmerman that looking at the results and simply inferring the market just shrunk by one-third would be a mistake:

“Doctors faced with a diagnosis of “C.Diff” are dealing with an emergency that requires immediate treatment. The current lab tests that are sensitive enough to tell the difference between normal C.Diff and the hypervirulent form take three weeks to produce a result. [Ed. Note. The most common confirmatory study is an enzyme immunoassay for C. difficile toxins A and B, with results available in two to four hours.] So in the real world, no doctor is going to wait around for that result before deciding whether to prescribe the Optimer drug, or the usual vancomycin…. They’re likely to prescribe fidaxomycin anyway, in the hopes that the patient is among the two-thirds of the population who will get a greater protection against relapse.”

Although C. difficile results in longer hospital stays (from three –to- thirteen days), Prunty is gravely mistaken in assumming that doctors would be more inclined “to prescribe fidaxomicin anyway.” In the real world community hospitals are under tremendous pressure to rein in all costs. And, as drug procurement costs are visible and easy to quantify, one could just as easily conclude that hospital administrators would “encourage” treatment algorithms favoring generic vancomycin or metronidazole (off-label usage) - especially with potential Medicare reimbursement cuts on the horizon.

A second fidaxomicin Phase 3 clinical trial is ongoing, and Optimar anticipates reporting data from this trial later this year. Assuming this study demonstrates similar top-line results, fidaxomicin could be on hospital pharmacy shelves by mid-2010. However, until the company has data on fidaxomicin’s cost-effectiveness (calculated as total costs divided by proportion of successes) the drug will likely be reserved for use in vancomycin-resistant enterococci (VRE) infections.

Editor David J Phillips does not hold a financial interest in any stocks mentioned n this article. The 10Q Detective has a Full Disclosure Policy.
Posted by David J. Phillips at 11:00 PM