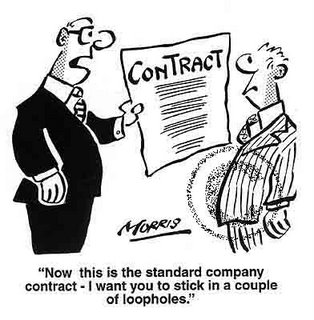 The following headline piqued our curiousity: $1 a year salary CEO: Good for Stocks? The author of the posting speculated that aligning pay practice in step with stock price performance provides a sufficient incentive to the CEO to execute the financial stewardship necessary for shareholder value creation.

In support of this argument, the author then went on to analyze “the returns of six of these ‘dollar a year stocks’ for 2006"; it turns out that they were all up, with the exception of Yahoo (YHOO), and, according to the blogger, "if you exclude Yahoo from the list, the average return for the group was up 14%, higher than the return for the NASDAQ at 8 percent and the S&P 500 at 12 percent."

Aside from the statistical problem inherent in making inferences about stock performance from a finite population of six CEOs,when the 10Q Detective did its Due Diligence, we found that the purported one-dollar a year CEO was more myth than reality:

In 2003, Apple granted Messer. Jobs an additional 10 million shares (now fully vested). Oh, and remember that Gulfstream? In March 2002, the Company entered into a Reimbursement Agreement with Jobs for the reimbursement of expenses “incurred by Mr. Jobs in the operation of his private plane when used for Apple business.” During 2005, the Company recognized a total of $1,075,545 in expenses pursuant to this reimbursement agreement related to expenses incurred by Mr. Jobs (in 2005).

Steve Jobs also served as CEO of Pixar, the computer animation studio behind such animated feature films as Toy Story, Monster’s Inc., and Finding Nemo. On January 24, 2006, the House of Mouse agreed to purchase the studio, in an all-stock transaction worth $7.4 billion.

Accordingly, at the effective time of the merger, the 60.0 million share of Pixar common stock held by Mr. Jobs were converted into 138 million shares of Disney, making Jobs the largest individual shareholder, with approximately 6.3% of the outstanding shares.

Steve Jobs was ranked 49th on Forbes 400 Richest (2006), with a net worth in excess of $4.9 billion. [Ed. Note As the price of Apple shares have effectively doubled in value in the last year, Jobs’s estimated net worth is north of $5.4 billion.].

Job’s is well-compensated for someone whose salary at Apple officially remains one-dollar per year.

Mr. Katzenenberg beneficially owns 36.4 million (of Class A & Class B) shares, worth an estimated $109.2 million. In addition, 618,571 shares of Class A restricted stock with performance-based vesting conditions granted to Mr. Katzenberg at the time of its October 2004 IPO will vest in the first quarter of 2009. As of January 12, 2007, these shares had a value of $18.53 million (based on $29.96 per share, the closing price of DreamWorks Animation’s Class A Stock on the NYSE on such date).

In December 2005, Messer. Katzenberg entered into an agreement at his initiative and request, which waived equity awards—in aggregate $13.0 million-- he would otherwise have been entitled to receive under his employment agreement, for the fiscal years ending December 31, 2006,2007, and 2006. Before our readers begin to believe that Messer. Katzenberg is a worthy hero right from central casting, sacrificing for the good of the many, read on:

Mr. Katzenberg serves on the boards of The Motion Picture and Television Fund, The Museum of Moving Image, Cedars-Sinai Medical Center, California Institute of the Arts and The Simon Wiesenthal Center. He is co-chairman of each of the Creative Rights Committee of the Directors Guild of America, and the Committee on the Professional Status of Writers of the Writers Guild of America. In addition, he helps with fundraising efforts on behalf of AIDS Project Los Angeles, which provides its clients with medical and social services.

Messer. Katzenberg had to choose, his social responsibilities or stewardship of DreamWorks. He chose the former.

Katzenberg ‘voluntarily’ disavowed his future compensation to accommodate the hiring and compensation of Lewis Coleman, former CFO of Bank of America, appointed President of DreamWorks Animation on December 5, 2005.

Pursuant to his three-year employment agreement, Mr. Coleman earns an annual salary of $1.25 million. He was also awarded an initial performance grant of 82,998 shares of restricted stock.

KMI owns the general partner interest of Kinder Morgan Energy Partners ((KMP), one of the largest publicly traded pipeline limited partnerships in the United States. This an energy storage and transportation company operates either for itself or on behalf of Kinder Morgan Energy Partners, L.P., approximately 43,000 miles of refined petroleum product pipelines and approximately 150 terminals. Combined, the companies have an enterprise value of more than $35 billion.

Although this poster boy for “prudent’ executive compensation pays himself only one-dollar a year, he did earn $85.0 million in corporate dividends last year.

Do not be fooled by Semel’s seeming humility; for, including exercisable stock options, Semel beneficially owns about 18.4 million, or 1.3%, of Yahoo!’s stock, worth an estimated $541.9 million.

And, on May 31, 2006, as an “incentive” to sign this highly touted one-dollar employment agreement, the Board granted Mr. Semel a stock option to purchase 6 million shares of the Company's common stock at a per share exercise price of $31.59 (the closing trading price that day).

For each of 2006 through 2008, too, Mr. Semel will also be eligible to receive a discretionary annual bonus payable in the form of a fully vested non-qualified stock option for up to 1 million shares with an exercise price equal to the closing trading price of the Company's common stock on the date of the to-be issued grant(s).

Editor David J Phillips does not hold financial interests in any of the companies mentioned in this posting. The 10Q Detective has a Full Disclosure policy.

In some cases, like Bill Ford last year, they "do without" salary but get dividends from the shares they own.

is it literally means one-dollar a year salary? and only stocks that mak e these CEOs get money?
thanks!
nice article!