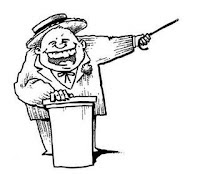 Despite another quarter of red ink, Martin Petersen, Chief Financial Officer of Raser Technologies, Inc (RZ-$8.65), which is looking to develop geothermal assets as an alternative energy source, said the Company "made tremendous progress in achieving [our] goals during the year, setting the stage for a productive and exciting 2008."

President Patrick Schwartz, crowed, too, about "significant relationships and agreements [that we] completed this past year," including a signed license agreement with Wilson Auto Electric Ltd. Of Canada, in which Wilson will have the right to incorporate Raser’s Symetron™ technology into truck and automotive alternators.

Whenever the 10Q Detective starts to feel despondent about the plight of the markets, we turn to Raser press releases—any one of them—for a good chortle.

The 10Q Detective has followed the alleged progress of the Company for more than two years now. Like we said back in December 2005, Raser [remains] a stock-promoter's dream--hyped PR with no content.

As a result of six-years of ongoing operating losses, Raser has an accumulated deficit of approximately $51.2 million on cumulative revenues (from inception) of approximately $0.8 million, as of December 31, 2007.

Despite repeated stumbles in finding revenue pathways to profitability, management shoulders on.

When we last lookied in on the Company, management was promulgating how its Symetron platform would revolutionize the efficiency of electric motors, offering the "tremendous promise in delivering improvements in power and efficiency in many industrial motor applications."

Raser is acquiring one of the largest portfolios of geothermal assets in the country, with interests (and leases) in more than 200,000 acres of land in six western states identified as having potential to provide sufficient geothermal energy to operate geothermal power plants.

From the potential resources acquired, management is looking to identify properties that it believes can be developed rapidly and efficiently, and will initiate efforts to develop power plants on such properties.

Raser announced in April 2007 that it would initiate the development of approximately 100 MW per year over the following three years and then ramp up to 150 MW per year for each year thereafter.

The 10Q Detective notes, however, that critical to the successful development of each of the power plant projects is adequate financing—an ongoing concern for the Company (in addition to necessary cash needed to cover upfront lease bonuses and annual delay rentals for the leases until a geothermal power plant is placed in service).

When it comes to small capitalization companies, the 10Q Detective embraces the maxim: success runs inverse to the total of press releases.

No major electronic manufacturers or car makers have signed with Raser, leading us to question the visibility of the technology and/or management’s ability to exploit the potential commercial viability of its Symetron technologies. Ergo, we are doubtful that Named Executive Officers will be any more successful in executing on revenue and income opportunities in the Geothermal Energy segment.

To date, Raser has not received ANY power purchase agreements for its estimated geothermal reserves, so no forward revenue stream can be relied upon to cover requisite expenses.

Do the math…the Company’s ability to continue 'as a going concern' is dependent on future financing deals—with more dilution to follow.

Consistent with our limited operating history, we have generated limited revenues from operations. We anticipate that material revenue will not be generated from our Power Systems segment until the geothermal power plants we intend to develop are constructed and placed in service. To date, our primary source of revenue has been from research and development subcontracts administered through contractors for certain government agencies. Form 10-K, filed March 11, 2008.

Management loves to spend monies: cash used in operations and for capex were approximately $6.7 million and $9.9 million, respectively, for the year ended December 31, 2007.

The Company also has contractual obligations (operating leases and purchases) due in the aggregate of $34.2 million, with about $26.4 million owed in less than one year!

[Ed. note. As of December 31, 2007, Raser is obligated to pay purchase and service fees to one vendor of approximately $25.1 million in 2008—eighty times actual sales delivered in FY 2007. We believe that the unnamed vendor is UTC Power (NYSE:UTX) and the purchase agreements are for the delivery of PureCycle modular units for the first three geothermal power plants that Raser intends to develop.]

Raser’s independent registered public accounting firm’s report on the Company’s 2007 financial statements questions Raser’s ability to continue as a going concern, due to the lack of sufficient capital and management’s [continued] inability to operate at cash breakeven.

Each geothermal power plant build-out leaves a dilutive footprint, too. To date, Raser has financed operations principally through the sale of equity and equity related securities.

A financing agreement with Merrill Lynch in January 2008, which provides for the funding of up to 100 MW of power plant construction, was structured to provide the brokerage with the ability to receive warrants to purchase up to 3.7 million shares of Raser’s common stock (ancillary to $38.4 million in the form of 15-year fully amortizing notes for the construction of the Company's first 10.5 MW geothermal power plant in Nye County, Nevada).

Raser is like a heroin addict looking for his next fix.

What is management doing to preserve cash? Effective March 9, 2007, the Company reduced the number of credit cards available under its corporate credit card program (with about $75,000 in annual savings).

In addition, the Company is issuing shares of its common stock as compensation for services rendered by certain vendors. On May 24, 2007, Raser issued 15,000 shares, valued on the date of issuance at $110, 250, to Cummins and Barnard as compensation for engineering services provided to assist with the development of geothermal power plants.

Beyond 'proof of concept,' and absent visible revenue streams—actual commercialization of Symetron technology and/or production of geothermal energy—the 10Q Detective does not believe the risk/reward ratio favors speculative purchase of Raser shares. AVOID

Hey, you forgot to disclose that the author has a SHORT POSITION in RZ at the end of your article. All you shorts are pathetic.

Carnival Barking? It amazing that that you have overlooked the significant players that have choosen to team up with these guys - Merrill Lynch, UTC, PG&E, Tecstar, HHI, Wilson Automotive and many others that aren't usually swayed by 'carinal barking' but do invest in good business models. I will be interesed to see your follow up once they have turned on a few geotehrmal plants and are demonstrating a PHEV SUV.

I'm an old time stock market guy and through the years there has been a great 'marker' for companies in trouble: They come up with the equivalent of the cure for cancer.

These days--mentioning Merrill Lynch as a significant investor does nothing to further your argument!

Why is it that each--and every time--I post adverse information--are you FORCE PROTECTION bulls still listening?--am accused of being short the stock.

This seems like a VC play - they have no business being a public company. The barkers you love so much actually used to be called "stock touts" back in the day. Nowadays, they're dignified with titles like "research analyst" and "investment banker" (aside: the only true "bankers" of today are value funds).

At best, this is an expensive call option on geothermal energy and the upcoming alternative energy bubble. ORA is a similar play. Hell - you might as well invest in ZOLT if you're into sticking your head up your ass like this woman:

I have many of the same feelings in regard to RZ that you do but you might be leaving out some crucial considerations, even for this pumperooni.

Geothermal power development (as distinguished from heating and cooling) requires massive upfront capital expenditures for all that "free" energy.

RZ is in a quite favorable position in relation to more sober junior geothermals with its seat on the NYSE that allows it a megaphone others do not have.

The "going concern" label is a way of life with such outfits for instance.

RZ doesn't bother with the details of development of a geothermal resource with a primitive technology that takes a considerable leap of faith.

Still the idea of modular development of the power plant with UTX technology is interesting, to say the least.

I don't know if it is a hare-brained idea, a wondrous innovation or something in-between. I tend to favor the first but shorts could get an electrifying shock if things go well.

To Richard and one Anonymous poster: Mr. Phillips posts FACTS taken from the company's own 10k. Further, if you look at his considerable credentials, you can see this is no blowhard crackpot. YOU guys, on the other hand, are....WHO? Where is your contribution backed up with logical analysis? What are YOUR credentials? You accuse him of being short? Well - I accuse you of being LONG...what's the ethical difference? Dumbasses abound...

As of your last post you say they have now options for sale of power. They do have a PPA from The city of Anaheim for 22 MW with delivery by Dec 2008. They also have a commitment for two prototype vehicles with PG&E and an agreement with HHI for their electric motor technology.

If your looking for proof of the Pure Cycle tech of UTC try their Alaska project, running now for a year or more.

The 10Q might have more credibility if it included all the positive facts as well as all your negative twist.