Be Skeptical of Blodget's Yahoo! Musings. 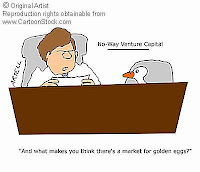 Yahoo! Inc. (YHOO-$26.82) rose nearly 6 percent, or $1.41 per share, on Friday, sparked by comments by former Wall Street analyst Henry Blodget that the online Internet search company could be a takeover target for Microsoft Corp.

At a UBS conference, Microsoft division president Kevin Johnson said yesterday that Microsoft plans to grow its search share from 10% to 30% and its online ad share from 6 percent.

In 2003, he was charged with civil securities fraud by the SEC. He settled without admitting or denying the allegations and in April 2003, was fined $4 million and subsequently barred from the securities industry for life.

Blodget has been writing about Yahoo! for years. In March 2001, his research note on Yahoo! predicted the company might be about to offer an insight into its earnings, an announcement of restructuring, an acquisition or a decision to enter into a strategic investment. Whatever. As it happened, then-CEO Timothy Koogle was about to quit.

Blodget was half-right, as he so often was. The problem was it was impossible to tell which half, according to a Forbes article in 2003.

Skeptical scrutiny is the means, in both science and religion, by which deep insights can be winnowed from deep nonsense. ~ Astronomer Dr. Carl Sagan (1934 – 1996)

Sorry. Given Blodget’s history of talking out of both sides of his mouth, and the failure of Silicon Alley Insider to disclose whether or not any of its columnists hold a financial interest in Yahoo! Inc., perhaps investors out to take heed of Blodget’s own advice—and be skeptical of any information published on his blog.