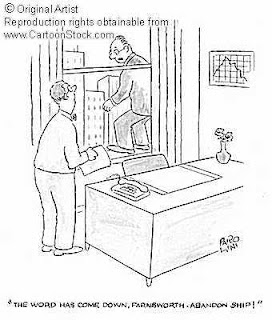 Shares of Merrill Lynch & Co (MER-$65.00) are up about 7 percent to $65 in mid-day trading after CNBC television said Chief Executive Officer Stanley O'Neal allegedly told friends he expected to be ousted by the end of the weekend.

A mountain of ice and the debris of a ship that has been crushed by it. It is a great tragedy, not a single survivor. ~ German painter Caspar David Friedrich (1774 – 1840)

This breaking news follows on the heels of a New York Times report that O'Neal had angered the Board of Directors by broaching the idea of Merrill merging with Wachovia Corp (WB.N) without first getting his board's approval.

Unlike the British luxury passenger liner RMS Titanic, which sank on April 15, 1912, Stanley O’Neil is no Captain Edward John Smith, who went down with his ship.

The 10Q Detective speculates that O’Neil’s secret talks were motivated more by personal interest than by what was best for all stakeholders.

The Compensation Committee provides a compensation framework that is structured to reward its Named Executive Officers for their contribution to the Company’s financial success. Specifically, bonus compensation is weighted on year-over-year net revenue growth, pre-tax earnings growth, and ROE.

Global financial markets performed well for most of 2006, which translated into the global financial services titan reporting record net earnings of $7.59 per share in fiscal 2006 ending December 31, up 47% from $5.16 in 2005.

However, the 10Q Detective does note that his total compensation included $26.8 million in restricted stock grants, awarded at a fair market value of $95.825 per share.

On Wednesday, Merrill Lynch & Co. announced $8.4 billion in write-downs for the third quarter—much larger than those posted by any of the bank's Wall Street competitors—and equaling 14% of its market capitalization (and exceeded its earnings in all of 2006).

Merrill also reported a $2.3 billion loss, the biggest quarterly loss in its history.

Goldman Sachs analyst William Tanona also estimated Merrill Lynch could have a $4.5 billion write-down in the current quarter on its remaining $20.9 billion exposure to collateralized debt obligations and subprime mortgages. He said the market for those securities continues to deteriorate.

Given the third-quarter loss, Merrill's annualized ROE for the first nine months of the year is 6.5%, putting O’Neil’s 2007 bonus in jeopardy. As stated in the company’s 2006 Proxy: “Failure to achieve at least 2005 baseline ROE for any performance year results in the complete forfeiture of the Company match for that year.”

If Wachovia—or any other interested suitor—were to acquire the Company, Mr. O’Neil could receive “Change-in-Control” Severance Payments, Retirement/Insurance Benefit Payments, and (Accelerate) Stock-Based Compensation of $29.5 million, $116,609, and $221.8 million (value assumption was based on $93.10 per share), respectively!

Short of a takeover, Mr. O’Neil—with more than 20-years of service—will still leave a rich man: 1.75 million in unexercised (vested) options, exercise prices between $39.80 - $59.85 per share, $24.8 million in accumulated benefits in his pension plan, and $50.79 million in aggregate balance (at last fiscal year) in a non-qualified deferred compensation plan.

Shares in Merrill have fallen by more than 30 percent this year. Those investors who purchased stock near its 52-weak high of $98.68 per share are eagerly lining up to show O’Neil the door.
Editor David J. Phillips does not own shares in any companies mentioned in this column. The 10Q Detective has a Full Disclosure Policy.
Posted by David J. Phillips at 1:11 PM

O'Neal should be let go just because of the huge loss Merrill suffered. But then this rumor about Wachovia starts. I don't think there is anything to this rumor, because if Merrill wanted to enter into negotiations with Wachovia, trust me there are better, more discreet connections (check out this map http://www.newsvisual.com/newsvisual/2007/10/could-merrill-l.html ) than just having the CEO walk up and start a conversation. The BOD at Merrill should have stepped in awhile ago. I think O'Neal will be gone by this time next week at the latest.

Thanks for sharing. I was surprised just to see this a minute ago in the NY Times headlines, but then with all the problems ML has been having these past two months has made me very scared of what would happen to Stan O'Neil!

two more reasons for him to be shown the door

plus during that time 25,000 people were fired,

two more reasons he should be let go

Stan is a ruthless guy. He leads by fear and intimidation and has no tolerance for anyone who disagrees with him. He went on a campaign to eliminate extremely competent managers and executives instead of using their talents to enhance shareholder value. Great leaders don't lead like this. Great leaders are not afraid of different points of view, resect others and encourage debate. Ultimately they are great at builing consensous. In short Stan O'Neal looted Merril Lynch for his own benefit with blatant disregard for shareholders and total disrespect for its culture.

Excuse me, but who cares about how Stan O'Neil being ousted from Merrill. He's going to walk away a very rich man and has a great track record so someone will pick him up. What about the employees?! How do they take this all in??

Stan is a victim of circumstance, Merril owes much of its success in the past decade or two to this man. Hats of to you Mr.Oneill, your the American dream is every way, from the counrtyside to the top of wall street-your life has only just begun. It just goes to show that no matter how instrumental your role in someonelse's company a success, they will never forget the colour of your skin.

I was waiting to see how long it was before someone brought out the race card/ My bet was on either Al Sharpton or [matchbox cover-REV] Jesse Jackson.

In the year 2007, business does not differentiate between black & white. It knows only green -- the color of money.